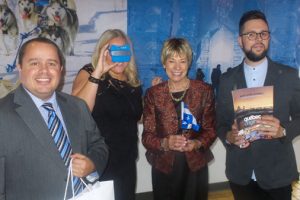 All Fairmont Queen Elizabeth Hotel officials are saying is give the redone John Lennon and Yoko Ono Suite a chance.

Montreal’s Queen Elizabeth reopened earlier this year after being closed for over a year for a $140-million renovation project which sees the reopening its John Lennon and Yoko Ono Suite.

Suite number 1742 housed John Lennon and Yoko Ono for a week in late May of 1969 when they staged their “bed-in for peace,” an event which drew celebrities and media personalities alike to the hotel, and which also prompted some other guests to unsuccessfully ask hotel management that the duo be evicted because of the noise their stay generated.

The 1,370-foot-suite suite saw changes from the renovation, including lyrics from the classic Lennon antiwar song Give Peace a Chance – recorded in the suite – inscribed on walls. Those walls also now have photos of Lennon and Ono.

Enhancements in technology from the Lennon area enable people to pick up a phone and hear the musician’s voice, while a headset provides a virtual reality experience. A guitar is also found.

Martine Venne of Tourisme Montreal says the bed-in is well-remembered by Montrealers, who found their city in the international spotlight when pajamas-sporting Lennon and Ono made their very public statement against war.

“We’re proud of having had it,” she said during a Quebec Original event in Toronto Thursday. “It was super-great visibility for the city.”

The city was on a roll in the late 1960s, having successfully staged the expo 67 Word’s Fair two years earlier, she notes.

The John Lennon and Yoko Ono Suite was made available for $1,969 on the Queen Elizabeth’s reopening, with the rate recalling the year the hotel found itself in the limelight. Lennon and Ono, in contrast, paid a $1,000 a night for it.

Smallish beds were placed outside the hotel on its reopening, enabling Montrealers to stage their own brief bed-ins.

Only those who book the suite can enter it and given the nightly rate Venne says it’s unlikely she’ll find herself doing so.

But she adds she would love to stay in what’s arguably this country’s most famous hotel unit, a hotel suite which in turn hosted a man who was arguably the most famous musician of his era.

“I’d have a great party in it,” she says if the opportunity to overnight in 1742 ever arises. “It’s a famous room for beautiful reasons.”

Meanwhile, Venne says that this was a great year for the tourist trade in Montreal, which has been celebrating its 375th anniversary all year.