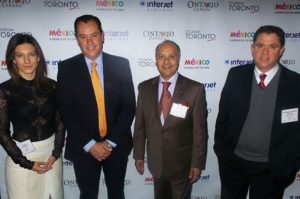 Mexican carrier Interjet is inviting passengers travelling with it between Canada and Mexico to stretch their legs a little while airborne.

This fall has seen the airline begin linking Montreal, Toronto and Vancouver with both Mexico City and Cancun, and an airline that has traditionally had a somewhat low profile in this country says it has a couple of aces up its sleeve when it comes to attracting Canadian clients, among them being able to offer them added comfort.

Miguel Arana Martinez of the airline’s head office told PressToday during a Wednesday Toronto gathering that passengers will find what he said is a generous 34-inch seat pitch, made possible because the seating on the A320s Interjet uses on its Canadian routes are configured for 150 passengers, rather than the 186 A320s normally carry.

Interjet, which began operation in 2005 and which now has over 70 planes that carry people to points in North, Central and South America and parts of the Caribbean, also touts the likes of free snacks and drinks for passengers, its policy of not overbooking flights and its “affordable fares,” with fares from each of the Canadian cities in its network to Mexico City starting at $256, while Cancun fares from Montreal, Toronto and Vancouver all begin at $250.

Arana Martinez noted those travelling to Mexico City with Interjet will arrive in the Mexican capital early, enabling them to make same-day connections to other destinations in the airline’s network.

He added that the airline can deliver people from Canada to other Mexican points of interest that see relatively few Canadian visitors. “We would like to prove that there’s a lot more to see in Mexico than Cancun.”