IPW Ends With A Bang! 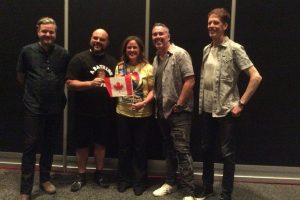 IPW delegates were treated to a surprise concert from the Barenaked Ladies on the final day of the annual US trade show in New Orleans.

Known for hits like the theme to the popular TV show The Big Bang Theory and Brian Wilson, the band performed about a dozen songs and then posed for photos backstage with VIPs, including Universal Orlando Resorts’ (UOR) senior manager for Canada and super fan Beth Fleeton (pictured), as well as other Canadian delegates.

Band vocalist Ed Robertson invited the more than 6,000 attendees to picture him writing If I Had A Million Dollars in the shower at his cottage in “rural Northern Ontario, Canada.”

The luncheon concert was sponsored by UOR and Kissimmee CVB.