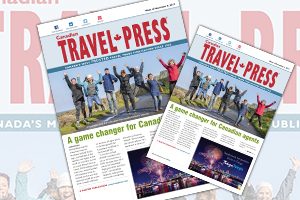 With Belfast and the Causeway Coast in Northern Ireland clinching a coveted spot as the number one region in the world for travellers to visit in Lonely Planet’s Best in Travel 2018 ranking, as last year saw a record number of Canadians travel to Ireland, and as non-stop and year-round air access from Canada continues to increase, all signs point to further growth for Canadians travelling to the Emerald Isle, reports assistant editor, Ann Ruppenstein in an exclusive story in this week’s digital edition of Canadian Travel Press.

“Last year we had 203,000 Canadians so we’ve had over a 100% increase since 2013, and we’ve had double-digit growth the last three years,” says Jonathan Sargeant, trade promotions and e-marketing executive at Tourism Ireland.

As Canada continues to pull its weight bringing visitors to Ireland – 2016 saw the country join the ranks as a top 10 feeder market for Ireland – Canadian Travel Press joined a group of travel agents and tour operators from across Canada on an eight-day FAM to learn more about the tourism offer around the island nation.

“The goal is really to increase business to Ireland and brand awareness,” says Sargeant about the annual FAM put on by Tourism Ireland in Canada, Tourism Northern Ireland and Failte Ireland.

Along the journey, the group took in the cliff side shores of Arranmore Island on the Wild Atlantic Way, learned how to pour the perfect pint at the Guinness Storehouse in Dublin, visited attractions like the Titanic Belfast museum and Winterfell Tours, one of the filming locations for Game of Thrones, and participated in off-the-beaten path experiential offerings like a cooking demonstration with NI Food Tours and an interactive visit to the Listoke Distillery & Gin School.

“We normally do two nights in Northern Ireland to get the message out about the beautiful city of Belfast and Derry-Londonderry, and also showcase the likes of the Giant’s Causeway and the Causeway Coastal Route,” he says.

“Tourism is great for the Irish economy and in Northern Ireland it plays an extremely important role, but also on the whole island it’s the largest indigenous industry and it hires over 250,000 people on the island so we really do value the importance of tourism,” he stated.