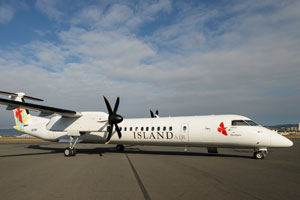 Hawaii Islands-based Island Air has begun increasing the number of inter-island flights on its schedule, following the addition of new Q400 aircraft to its fleet,

Over the next four months, the carrier plans to phase in new regularly scheduled flights that will significantly increase its round-trip service between Oahu and the neighbour islands.

By the beginning of May, Island Air expects to offer up to 476 flights each week between Oahu, Maui, Kauai and Hawaii Island, compared to the 266 flights per week it currently offers.

“The added flight service is in response to growing demand from our customers and travel partners and also reflects the improved operational efficiencies of the new Q400 aircraft that are being phased into our fleet.”

Seen in the photo is Island Air’s first new Q400 aircraft, named Ola Kupono, which means “safety in everything we do,” which began service on Jan. 12, 2017. (Photo provided courtesy of island Air).