Israel, Greece Sparkle For The Trade At Toronto Event 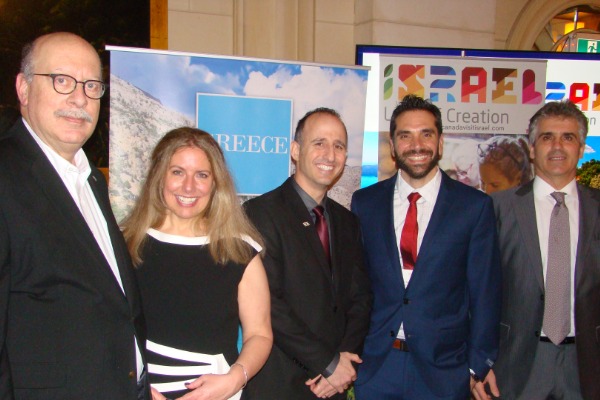 It was a night of celebration as two gems of the Mediterranean – Israel and Greece – teamed up to welcome a group of about 120 travel trade types to an in-person event at Toronto’s Windsor Arms Hotel.

The Israel Government Tourist Office’s (IGTO) Jerry Adler welcomed the crowd, telling them that “we’ve wanted to do this for a long time,” but noted that the tourist offices had waited until people were comfortable attending events in-person.

Clearly, they were. And the evening provided everyone with a sense that travel was returning and was on the road to recovery.

The combination of Israel and Greece is not surprising, with Adler pointing out that the two destinations have a long history and it was a logical partnership – and considering the strong tourism bonds between the two nations, the sense of the initiative was obvious.

The Greek National Tourist Office’s (GNTO) Sofoklis Savvas also greeted the Toronto audience, telling them that his office – although based in New York City – is there to help Canadian agents and operators with any and all of their needs.

Savvas also guided the crowd through a tour of the GNTO’s new website – www.visitgreece.gr — explaining that it was a ‘one-stop shop’ for their needs and those of their clients.

He also made it clear that Greece has something to offer agents and operators for each and everyone of their clients.

“It has been so long since we last met,” observed Gal Hana, Consul and Director of Tourism for the Israel Ministry of Tourism in Canada, in opening his remarks at the event.

Observing that it has been a “rough couple of years,” Hana told his audience that it’s now time for the industry to look to the future and clearly, Israel will be there with the kind of offerings that will give travellers what they want.

And between the two gems of the Mediterranean, Israel and Greece, agents and operators will find a vacation that appeals to the tastes of each and everyone of their customers.

Israel’s Jerry Adler, Fiona Kosmin and Gal Hana take time out for a photo with the Greek National Tourist Office’s Sofoklis Savvas and Dionysios Protopapas of the Consulate General of Greece during an in-person event in Toronto last week.