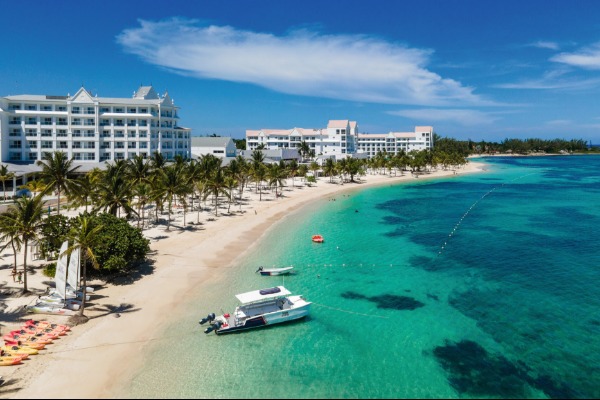 RIU Hotels & Resorts is celebrating its 20th anniversary in Jamaica. In 2001, the Spanish chain opened its first hotel in the country, the Riu Palace Tropical Bay in Negril.

From that moment, RIU’s commitment to the country has not stopped growing, and today it has six hotels in three different destinations (three in Montego Bay, two in Negril and one in Ocho Rios).

In addition, the commitment is reflected in the renovation and refurbishment that the chain has undertaken in Jamaica.

When the Riu Palace Tropical Bay opened in 2001, RIU became the first Spanish chain to decide to commit to Jamaica as a destination.

The challenge of taking RIU’s business to Jamaica was a personal commitment by Luis Riu, the chain’s CEO.

“Since my first visit to the island in 1998, I knew I had to open a RIU hotel in Jamaica. I was entranced by its beaches and nature, but above all by the culture and the charisma of its people, and I knew our clients would feel its charm too. At that time, it seemed crazy, but today it’s a success story. Jamaica is one of the Caribbean’s major destinations,” explained Riu.

The launch of the Riu Palace Tropical Bay was followed a year later by Riu Negril. After that, RIU carried on investing in other regions in the country, opening Riu Ocho Rios in 2005. Two years later came the opening of Riu Montego Bay, its first hotel in that part of the country.

Over the years, and including the renovation of Riu Montego Bay in December, the hotel chain has continued to invest in improving the infrastructure of all its hotels, as well as building two new hotels: Riu Palace Jamaica and Riu Reggae.

RIU Hotels now has more than 3,300 rooms in the country.

Due to the pandemic, RIU had to close its hotels in March 2020, but a few months later it was able to return to action.

The first to reopen its doors was Riu Ocho Rios in June, and now the Riu Palace Jamaica and Riu Montego Bay are also in operation, all implementing the protocols set out in the RIU Hotels Post-COVID Manual.