It’s All About Agents 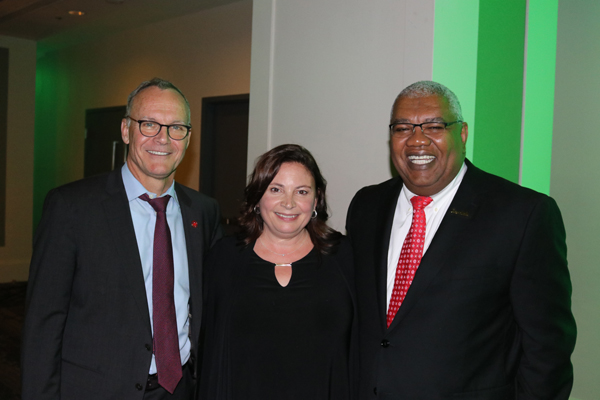 Baxter Media’s 2019 Agents’ Choice Awards Gala was all about travel agents and presenting sponsors – Air Canada, Sandals and Trafalgar – each thanked them heartily for their hard work and support.

Representing Air Canada and Air Canada rouge was John MacLeod, vice-president of Global Sales & Alliances, who noted that since its launch in 2013 rouge has proved a huge success, now serving 70 destinations.

“This would not have been possible without the agent support [we get] from across Canada,” he said.

On behalf of Sandals, Gary Sadler, senior vice-president of sales, Unique Vacations, Inc., said it was a great honour to be among so many friends and colleagues and thanked Baxter Media for a 37-year partnership.

He added that Sandals’ success is largely due to travel agents, inspired by a vision of Chairman Gordon “Butch” Stewart.

“Perhaps one of Mr. Stewart’s greatest visions was the important role that he knew travel agents would play in the Sandals success story. I’ve said it time and time again… Sandals Resorts would not be where we are today – growing from that one resort in Jamaica into a global brand and tourism powerhouse across the Caribbean – without the hard work and support from travel agents.

Anita Emilio, vice-president, sales, Trafalgar and Costsaver Canada, also said it was an honour to be among so many friends.

“What an absolute privilege we all have to be here to celebrate another year of achievements that we’ve all worked so hard for. Every year, esteemed Canadian agents are offered the opportunity to cast their votes for their favourite supplier in over 40 categories, allowing them to be heard by the travel industry as a whole. Tonight, we hear from them together and on behalf of the Trafalgar Canada tribe we are honoured to be a part of the celebrations as we recognize Canadian favourites, all thanks to Baxter Media,” said Emilio.

She added, “For the past 73 years it has been the mission of Trafalgar and Costsaver to connect clients to people, places and experiences and reveal the diversity of the places they want to go. And this would not be possible without the hard work and partnerships with our loyal Canadian travel agents and community. Trafalgar and Costsaver have always been and always will be #AgentsFirst.

“We value our loyal partnerships with our agents and thank you for everything you do.”

What a trio! Seen, from l to r, are Air Canada’s John MacLeod; Trafalgar’s Anita Emilio; and Sandals Gary Sadler.