Home › Destinations › It’s All About Agents

It’s All About Agents 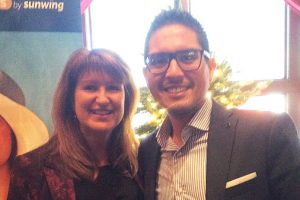 Sunwing’s vice-president retail sales, tour operations, Deana Murphy and RIU Hotels & Resorts’ director of business development and partner marketing, Hugo Aguilera had lots to tell agents attending their 5th annual travel agency appreciation luncheon in Toronto yesterday, not the least of which was to offer them a big ‘thank you’ for their support in 2017.

The annual event was all about RIU and Aguilera is quick to make it clear that there’s a lot going on at the company.

And to mark the opening, Sunwing (which has an exclusive relationship with RIU) will be taking a group of Toronto and Montreal agents to see the new property. Oh, you lucky agents.

Aguilera also noted that the adults-only, Riu Republica in Punta Cana is showing off its new renovations and now offers agents’ clients an expanded range of amenities and facilities, including the new Splash Water World waterpark; four new restaurants; three swimming pools; and 300 new rooms, to bring the resort’s total to 1,382 rooms.

In the Bahamas, the Riu Palace Paradise Island has reopened after a complete renovation and conversion to an adults-only resort.

There are a host of new amenities in the 379 guest rooms; the property has two swimming pools; and four a la carte restaurants, including an Indian restaurant that’s getting a lot of buzz since it opened.

While those are just a few of the 2017 highlights, Aguilera told Press Today that there’s lots more to come in 2018.

There’ll be more news on the renovation scene in 2018 as RIU continues to invest in its resorts as it stays on top of new market trends.

As for new hotels, Aguilera said that the company plans to open the Riu Palace Baja California in 2018 and renovate the Riu Santa Fe.

As for his message to agents, Aguilera said that RIU appreciates all of the business agents have given the company, not just in 2017 but in year’s past and, he added: “Our relationship with Sunwing is stronger than ever … so keep booking.”

Now that’s what you call a call to action.

In the photo (l-r) Sunwing’s Deana Murphy and RIU’s Hugo Aguilera get ready to celebrate the holiday season with their top travel agency partners at a special appreciation luncheon in Toronto yesterday.