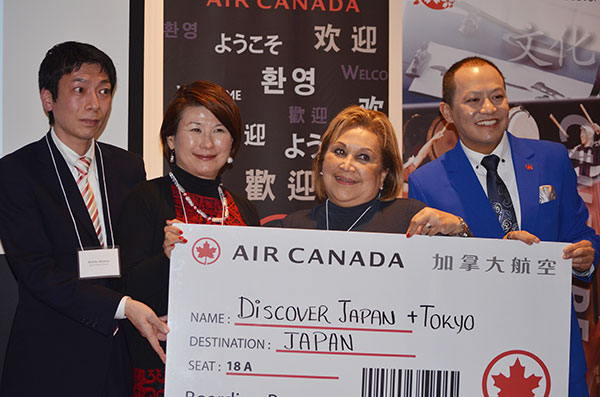 Both the Japan consul general Asako Okai and Hideaki Nakazawa, the executive director of the JNTO in Toronto, emphasized that Japan arrivals from Canada had exceeded 300,000 for the first time ever, peeking at 305,000.

There may be more to come, as the JNTO has raised its arrivals outlook for the years leading up to 2020, when Japan holds the next Olympic Summer Games.

It had originally projected arrivals at 20 million by 2020, but raised that to 40 million(!), as the visitor numbers have swelled at an unprecedented rate.

Much of this is being driven by a fast-growing demand by Chinese tourists for new vacation destinations. Arrivals to Japan were just 8 million in 2012, and reached 28.7 million in 2017.

“We are increasing the accommodation options and we hope to see more records broken,” said Okai. She compared the current wave to when Tokyo hosted the 1964 Summer Olympics as the country was rising from the ruins of WWII, and “Japan was transformed.”

Tourism professionals attending the dinner learned that Air Canada would be making a contribution to the arrivals numbers from Canada when it kicks off a new schedule of flights from Montreal to Narita. That service will start on June 1 this year.

Myrna Bubica, director of Mexi-Can Holidays (3rd from left) was the winner of a holiday to Japan on Air Canada during the recent Discover Japan & Tokyo dinner event at the Hyatt hotel in Vancouver. With Bubica was (l. to r.) Akihiko Kojima, sales director of New Otani Hotels; Asako Okai, Japan consul general in Vancouver; and Rocky Lo, the Asia business development director for Air Canada.