France Tourism Officials Optimistic About The Year Ahead 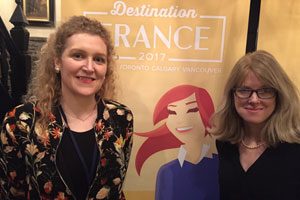 Despite coming off a challenging year, the mood was optimistic and festive last night as Destination France held its annual trade event in conjunction with Air France and numerous partners in Toronto.

Mélanie Paul-Hus, interim director for Atout France, Canada, said 2017 is going to be a busy year for France as it continues a “recovery plan” with early signs looking positive.

She noted that Canadians remain loyal to France and early January arrival numbers for both Paris and France are up over last year.
This year’s marketing campaign theme for France is “Joie de Vivre,” one Paul-Hus said is a natural fit, and representing “what France is all about.” It comes across in the country’s beauty and diversity of landscapes, variety of leisure activities, importance of architecture, strength of the arts, gastronomy and fashion.

On the Air France side of things, the carrier will offer up to 33 weekly departures to France during the peak season from Vancouver, Toronto and Montreal.

Agents attending the Toronto event were treated to a trade show, cocktail reception and awards ceremony.

Pictured are Paul-Hus (l) and Diane Audet of Air France.