JUST beCAUSE Gives Back 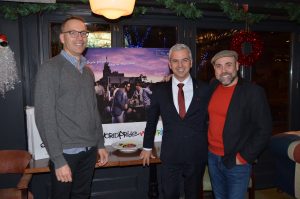 “The whole purpose of JUST beCAUSE is to give back, so our beneficiary is CANFAR,” says JUST beCAUSE co-founder Armando Mendonca. “Money raised at this event will go towards HIV research.”

Sponsored by the Tourist Office of Spain and WorldPride Madrid, the event marked the second JUST beCAUSE gathering since it launched during Pride.

“This is really another way for us to get more engagement within the travel community and HIV/AIDS is an issue that affects almost every Canadian,” says Kyle Winters, vice president and COO of CANFAR.

Looking ahead to 2017, co-founder Darrell Schuurman hopes to increase the frequency of the gatherings to quarterly networking events.

“The two of us have been in the travel and tourism industry for too long to count, so we have a passion for the industry, but we also have a passion and investment in the LGBT community,” he adds. “We wanted to marry the two together and provide an opportunity where LGBT individuals and allies in the travel and tourism industry can just come together, do networking, do some business, but at the same time be able to give back to the community in different ways.”

Pictured at the event, held at the Churchmouse, are JUST beCAUSE co-founders, Darrell Schuurman (l) and Armando Mendonca (r) with Kyle Winters, vice president and COO of CANFAR(c).