Keep An Eye On Leslie 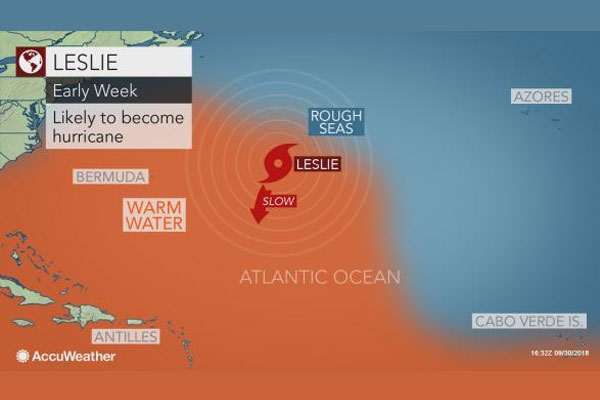 As the month of October begins, typically the Atlantic Ocean basin becomes quieter with fewer tropical storms and hurricanes. Long-lived Leslie will be the exception to that rule for the first week in October.

During this time, Leslie has not moved much, wading in the waters of the Atlantic for the past week. A similar scenario is possible for this first week in October.

AccuWeather meteorologist Steve Travis, said: “Leslie will slowly drift southward over the next few days and is likely to become a hurricane by the middle of the week.”

As it moves southward, Leslie will find itself in slightly warmer waters, which will help to fuel and strengthen the system.

Squeezed in between two high pressure systems, Leslie is forecast to remain over open waters of the Atlantic, posing no threat to any landmasses.

Leslie could bring larger waves across the Atlantic, which could impact Bermuda throughout the week. Strong rip currents are possible on the island, as well.

The only hope to break the pattern will be a strong front.

Go to www.AccuWeather.com for more.