Kimpton Raptor Challenge Is On 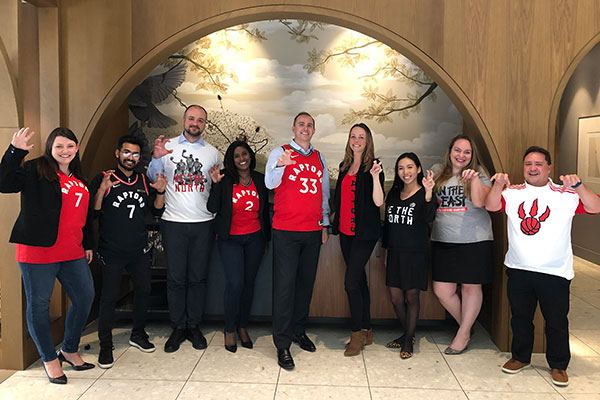 With the Toronto Raptors making the NBA Championship finals for the first time in franchise history against the Golden State Warriors, Toronto’s Kimpton Saint George Hotel (the only Kimpton in Canada) has challenged their Kimpton family in San Francisco (where the company originates) to a friendly wager.

If the Raptors hold the championship trophy for the first time, they must do the following: Serve Ontario wine at their evening wine hour (a Kimpton signature amenity); In addition to the wine, provide guests with Maple cookies/treats; and, all of this must be done in Raptors gear.

And, a special challenge for Nick Gregory, who has to wear an inflatable T-Rex costume, the mascot of the Raptors.

Gregory’s response challenge if the Warriors are victorious: Serve the “Cable Car” featured in Harry Denton’s Starlight Room during evening wine hour for the balance of June, assuming the series only goes four games; front of house hotel team and managers wear The Town shirts the first Saturday after the win; Toronto GM prominently showcases (on his desk) and uses daily a Golden State Warriors coffee mug.