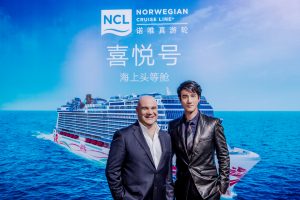 Arriving next summer with home ports in Shanghai and Beijing (Tianjin), Norwegian Joy will be NCL’s first purpose-built ship for the Chinese market.

Along with serving as Godfather of Norwegian Joy, Leehom will also represent NCL China as its brand ambassador, introducing Norwegian Cruise Line’s cruise experience to Chinese consumers through a variety of platforms, including television and radio commercial campaigns, as well as on social media.

Currently being built at Meyer Werft in Germany, Norwegian Joy will accommodate 3,850 guests. Joy will provide a multitude of VIP accommodations including The Haven by Norwegian, the line’s exclusive, ship-within-a-ship suite luxury complex.