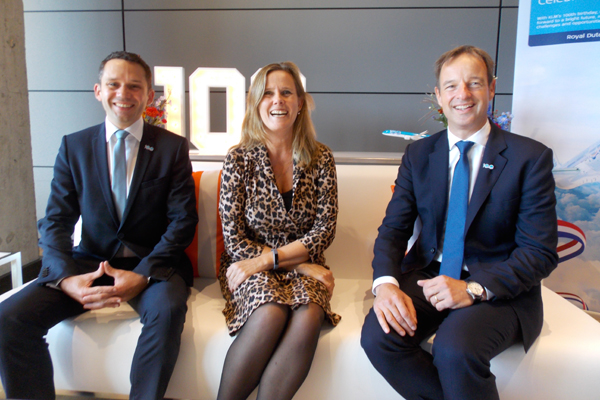 A hundred years in any business is quite an achievement. A century of flying in the airline business is, not to put too fine a point on it, simply astounding.

And if you ask KLM executive committee member, Barbara Van Koppen how the airline has been able to do it, she’ll tell you that it began with the entrepreneurial spirit that has characterized the carrier through a century of operation and has been coupled with the loyalty of its customers and employees, observing: “That has been the secret to our success.”

In Toronto to celebrate the airline’s 100th anniversary with its Canadian travel trade partners, Van Koppen emphasized the fact that: “We put the customer first always and will continue to do this going into the future.”

During her visit to Toronto, Van Koppen talked a lot about sustainability and KLM’s initiatives in this area, noting that “we have a responsibility to the planet,” explaining that the airline is committed to taking a leading role in this area and is calling on its partners and on governments to join it in its efforts.

Some of the airline’s new initiatives include launching a Smart & Sustainable Action Plan; partnering with a plant that produces sustainable aviation fuels; signing a cooperation agreement with the University of Delft which is working on creating a new type of aircraft that reduces emissions by 20%; and its consumer offset program.

For more on KLM’s sustainability initiatives, go to https://flyresponsibly.klm.com/gb_en#home .

Vincent Etchebehere, Air France KLM’s vice-president & general manager for Canada, certainly knows that it’s a special year, and is clearly proud of the airline’s long-lasting presence and continued investment in the Canadian market.

In fact, in 2020, Etchebehere said that KLM with be increasing its capacity by 6% and will continue to be obsessed with putting the customer first.

And he noted that in 2018 and so far in 2019, KLM has been the most punctual airline from Canada to Europe.

He also said that here in Canada, KLM already has a number of sustainability initiatives in place and is looking at ways to further engage its partners, along with engaging and educating its customers on airlines and sustainability through its digital platforms.

What’s in it for agents?

As for its travel agency partners, Bas Gerressen, senior vice-president, Air France KLM, is quick to point out that most of the carrier’s bookings come through the travel agency distribution network.

Gerressen said in Toronto that agents “play a crucial role” both in terms of the bookings they generate and the customer service that they provide.

And Etchebehere agreed, noting that he expects to see this continue going forward into the future.