Korea Gears Up For Olympics 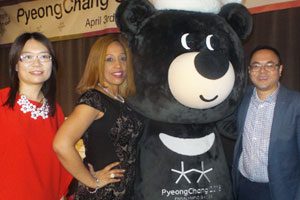 It looks unlikely Sidney Crosby will make the journey to South Korea for the PyeongChang Winter Olympics but the Korea Tourism Organization is hoping plenty of other Canadians will.

The NHL yesterday announced that it won’t participate in the Feb. 9-25 games, although Sunny Kim of the games organizing committee says she believes it’s possible the league will reconsider Monday’s announcement.

And regardless of whether NHL players compete in the Olympics Kim told a Monday Toronto audience that she’s convinced the upcoming Olympics will both serve Korea well and be entertaining for those on hand for an athletic spectacular that will have 102 events, some of them first for the games.

PyeongChang will only be the second time an Asian country has hosted the Winter Olympics – which in turn will be followed by the March 9-18 Winter Paralympic Games – and will help position Korea as both a winter sports and year-round tourism destination, she said.

Seoul’s hosting the 1988 Summer Olympics had a “significant impact” for Korea, she continued.

“Basically, it put us on the world map.”

As many as a billion people are expected to watch the PyeongChang games.

Kim said Korean tourism officials are hopeful that many Canadians will make the journey to PyeongChang. Much of Canadian interest in the Winter Olympics revolves around hockey and Kim said yesterday’s NHL decision has created a “tricky situation. I really do hope they’re [the NHL] still open to discussion.”

Tickets for the Winter Olympics are now on sale.

Seen here at the Toronto event with a PyeongChang games mascot are Lisa Lau of TaiPan Tours, Jackie Bishop Martin of Journey the Globe and Harold Ho of Royal Scenic.