Hong Kong Celebrates The Year Of The Monkey 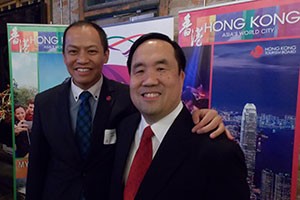 The Hong Kong Tourism Board (HKTB) and the Hong Kong Economic & Trade Office (HKETO) teamed up for the 10th year in a row to host travel trade types for a celebration of Chinese New Year in Toronto this week.

Along with the traditional Lion Dance to welcome in the Year of the Monkey, the HKTB’s director of Canada and South & Central America, Michael Lim provided those on hand at the event with an update on Hong Kong’s performance in 2015 and its marketing plan going forward in 2016.

Yet despite the fact that the overall numbers were down, Lim pointed out that Hong Kong continues to be “the second biggest destination in Asia, just behind Mainland China.”

Even better, Canada put in a strong performance in 2015, with the HKTB’s director saying that “despite all the challenges, the total arrivals from Canada [reached] 358,848, representing growth of 1.1%.”

As for the coming year, Lim said that in 2016, Hong Kong will continue with its “My Time for Hong Kong” brand campaign which highlights the “authentic experiences that await visitors as they explore the sights and sounds of the city like a local.”

The HKTB’s director pointed to the wide range of experiences that visitors will find in the destination, including shopping, gourmet dining, natural wonders, arts, festivals, attractions and a lot of surprises.

All in all, the Year of the Monkey looks to be off to a good start … so Kung Hei Fat Choy … and stay tuned for more on Hong Kong in an upcoming issue of Canadian Travel Press …

Seen in the photo, from l to r, are Air Canada’s director, business development – Asia, Rocky Lo and the HKTB’s Michael Lim.