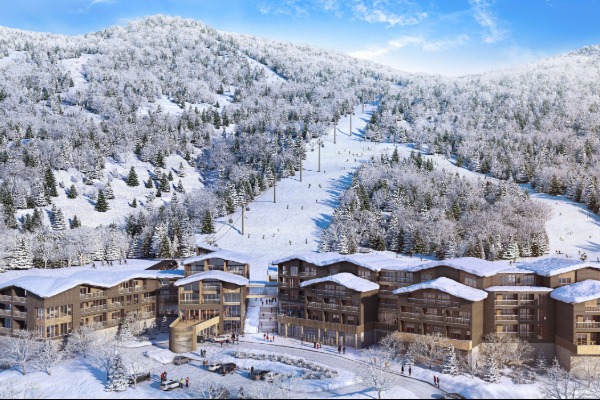 Le Massif de Charlevoix has unveiled plans to build a brand-new Base Camp. Once completed, the Base Camp will be the new headquarters and will include 400 housing units and several new facilities.

Le Massif Group has partnered with Bourgeois/Lechasseur architects and BMD architects to complete this major project. This project will include construction of several facilities such as: a restaurant, a microbrewery, a café, a daycare, a snow school, a general store, an outdoors sports store, rental shop and a ticket office. Guests will have direct access to ski slopes, bike paths and hiking trails. There will also be a new beginner’s slope.

‘’Designed to connect the mountain with the Petite-Rivière-Saint-François village, Le Massif de Charlevoix’s Base Camp will extend along a pedestrian path that will link the Western part of the municipality, the Club Med and the Base Chalet, and then merge with the mountain’s various trail. Its layout is inspired by mountain villages while still keeping a local flair,” said Olivier Bourgeois, an architect associate of Bourgeois/Lechasseur Architects.

“This new sector will increase our annual visitor capacity to support the projected growth of our clientele. With a $44 million investment, this mixed-use real estate project will become the gathering point where all of the mountain’s activities converge all year round,” said Roy. He says the project will reinforce Le Massif’s new position as an all-season mountain resort that can showcase local flavours.

The Base Camp will be accessible from the base of the mountain through the Petite-Rivière-Saint-François village, or from the Train de Charlevoix’s train station.