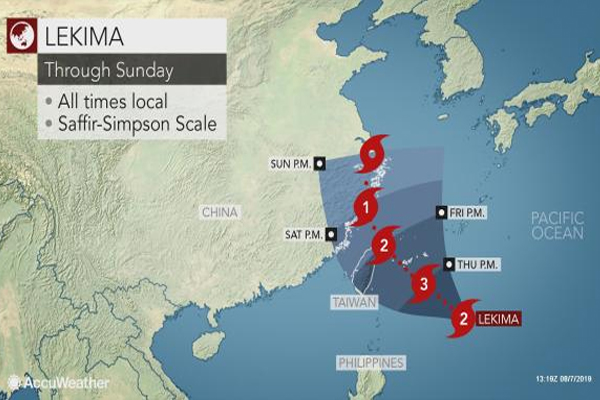 Lekima, which strengthened to a typhoon in the western Pacific basin on Wednesday, looks to be the first of two tropical systems to make landfall in the coming week.

As of Wednesday night local time, Lekima was equivalent to a Category 2 hurricane in the North Atlantic Ocean and was quickly strengthening over the open waters of the western Philippine Sea.

Still over water, the main impacts thus far have been rough seas, churned up from northern Luzon to Taiwan and the Ryukyu Islands.

However, that will change as the system’s northwesterly track moves Lekima towards the Sakashima Islands of Japan and Taiwan for the latter half of the week.

Impacts will first be felt along the Sakashim Islands of Japan, before passing near or just north of Taiwan. Over the weekend, Lekima will look to make landfall in China or pass dangerously close to its coast.

“An AccuWeather Local StormMax of 215 km/h will be possible,” added Houk.

The most likely location for such winds will be over open water or at coastal locations and will be capable of downing trees, sparking power outages and causing structural damage.