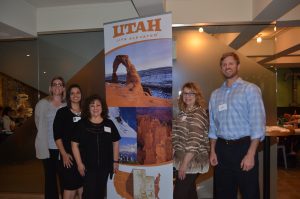 From the Mighty 5 National Parks to experiencing the “greatest snow on earth,” representatives from The Utah Office of Tourism and partners from the state stopped in Toronto last night (April 27) to showcase the destination dubbed a lovechild between Colorado and Arizona.

“The accessibility from Salt Lake City International Airport is a plus, direct flights from Calgary, Vancouver and Toronto, and the fact that within four hours from Salt Lake’s beautiful Wasatch mountains you can be hitting red rock, is a huge unique selling factor that makes us different from other states just because of the diversity of the terrain.”

Featuring the tagline Life Elevated, she says many of the state’s scenic locations have provided backdrops for films like Mission Impossible II, High School Musical, The Sandlot and 127 Hours.

“We have iconic natural backdrops, no props needed. The Utah Film Commission works hard to find people and bring them in to screen movies and use Utah’s beautiful landscape as their backdrop,” she says. “Most people visit our national parks, which is amazing, but we also have 43 state parks and seven national monuments, and many of our state parks could be national parks.”

As for misconceptions, Bremer points out that Utah is not dry.

“We’re seeing interest in brew tours, like hitting all the wineries, distilleries and the brew pubs, we have quite a few in the state,” she says. “It’s become this fun niche, hitting local award-winning food options, restaurants across the state, and brew tours or wine/distillery tours.”

Further news and information about Utah highlighted during the evening’s presentations were:

Home to a picturesque sandstone rock formation called The Wave, which only grants 20 hiking permits per day, Danielle Ramsay, assistant director for the Kane County Office of Tourism, says there are many alternative things to do in the area if visitors aren’t successful in winning The Wave lottery for a “truly magical experience.”

“We really are the poster child for the road to the Mighty,” she says, adding the region features pink sand dunes, and Bryce Canyon and Zion national parks — and even the Grand Canyon — are all in close proximity.

For a population of just over 5,000, Moab packs a punch, attracting some 2.5 million annual visitors, and is home to two national parks — Arches and Canyonlands — and the Colorado River, and boasts a plethora of outdoor activities.

“After the US, Canada is the No. 1 tourist,” says Elaine Gizler, executive director of the Moab Area Travel Council. “There are over 200 arches in Arches National Park.”

Located in the South-West part of the state, Cedar City is only a 2.5 hour drive from Vegas. Describing the area as having two national parks in her backdoor, Becki Lewis, group tour specialist for Cedar City/Brian Head Tourism Bureau, says Cedar Breaks National Monument was just accredited as one of nine dark sky parks in the state.