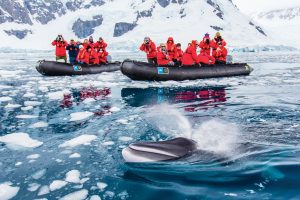 Lindblad Expeditions-National Geographic has added Nov. 6 and 16 departures to its Antarctica 2016 season.

Celebrating the 50th anniversary of the first citizen explorer voyage to Antarctica led by Lars-Eric Lindblad, the company cited increased demand, and with two ships in the region, National Geographic Explorer and National Geographic Orion, the season is almost sold out.

Both new departures will be set aboard the 102-guest Orion, and will follow the 14-day Journey to Antarctica: The White Continent expedition. Guests will see penguins in astounding numbers, myriad bird species, whales, majestic ice sculptures and experience the solitude.

The active, immersive adventure will including kayaking among icebergs, Zodiac cruises past resting leopard seals and hikes on the continent with an expedition leader, eight veteran naturalists, a National Geographic photographer, a Lindblad-National Geographic certified photo instructor, and an undersea specialist. Rates begin at $13,360 p.p., based on double occupancy in a category one cabin.