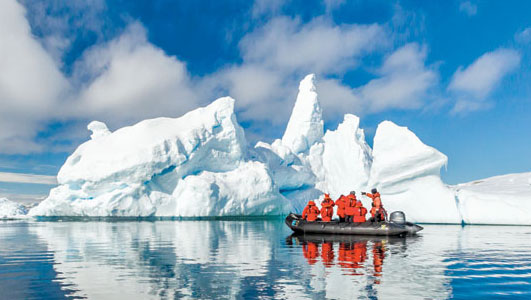 Lindblad Expeditions-National Geographic’s latest venture is the Epic Antarctica, a new voyage along the ice’s edge of remote Antarctic shores – including the Antarctic Peninsula, rarely visited Western Antarctica, the Ross Sea ice shelf, Macquarie and the sub-Antarctic islands of Australia and New Zealand.

With the highest ice class of any purpose-built passenger ship, National Geographic Endurance will be able to roam free at the bottom of the world on the “most untrammeled, adventurous route where endless white mountains roll to the horizon and massive glaciers churn icebergs into the sea.”

The voyage will explore dramatic places rarely visited and highlights include four beautiful wilderness regions in the company of a top expedition team; the big ice of remote West Antarctica, where guests are sure to set foot on ice where no other humans ever have; the massive white wall that marks the edge of the Ross Ice Shelf, the world’s largest; the seldom-visited sub-Antarctic islands of New Zealand and Australia, UNESCO sites that are havens for wildlife; paddling a kayak in pristine bays, and going on a Zodiac cruise amid the bergs; observing unique and abundant wildlife: endemic royal penguins, gentoo and southern rockhopper penguins, the world’s largest colony of Adélie penguins, and 100,000 pairs of king penguins on a single beach.

Passengers will journey to these remote destinations under the guidance of an expedition leader, a team of veteran naturalists, a National Geographic photographer, plus a Lindblad-National Geographic certified photo instructor, an undersea specialist and a wellness specialist.

Slated for delivery in 2020, the 126-guest vessel is the first polar build in the line’s history. With six decks, Endurance has over 10,000 square feet of glass to frame the polar scenery, while her décor and amenities are for just 126 passengers.