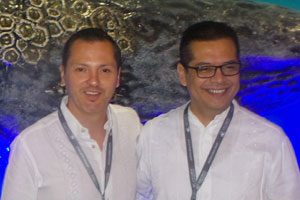 Esponda ended a 17-year Mexico Tourism Board career last year and relocated from Toronto to Los Cabos and for the past six months has been overseeing Cabo tourism promotion efforts, reports Press Today’s Ian Stalker from this year’s Tianguis Turistico in Acapulco.

“I visited Cabo often and loved it,” said Esponda a popular figure during his for years in Toronto.

Esponda said during Mexicos tourism show Tianguis that Cabo is now the fastest growing tourism destination in Mexico having 16,000 hotel rooms and 4,000 more in the works.

Seen here during Tianguis are Espsonda and Enrique Turcott of the Los Cabos Hotel Association.