Home › Destinations › Living Up To Its Reputation

Living Up To Its Reputation 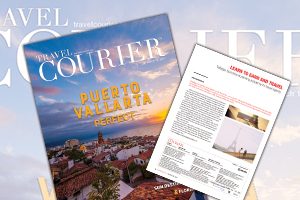 Living up to the moniker of being the world’s friendliest city – as named by Condé Nast magazine – may be a challenge, but one Mexico’s Puerto Vallarta is taking in stride and living up to as shown by the number of travellers flocking to the sun destination each year, reports Greg Coates in this week’s digital edition of Travel Courier.

Located on Banderas Bay in Mexico’s Jalisco state, Vallarta is a charming seaside resort surrounded by mountains and known for its beaches, culinary scene and nightlife.

Old Town, also known as the Romantic Zone, with its cobblestone streets, boutique shops and numerous restaurants, as well as the Malecón, the town’s seaside promenade, and the landmark Church of Our Lady of Guadalupe, make a walking tour of the city a pleasure.

Taking in a sunset somewhere along the coast be it sitting at an outdoor patio having a cool beverage – think margarita – or a lounge chair on the beach is not to be missed.

It’s often said the art is in the detail and if, conversely, the detail is in the art, then Puerto Vallarta is definitely on the right path.

The tourism hot spot is home to one of the most dynamic and fastest growing arts scenes in Mexico – with more than 30 art galleries displaying works by local, national and international artists. Guided art walks are held year-round and are an integral part of the local social scene.

“2017 looks to be another record year for Puerto Vallarta with the first two months of the year already showing positive numbers and per our hotels’ data, this February, Puerto Vallarta will be receiving the highest number of visitors for the month since 2008,” said Agustín Álvarez Valdivia, director of the PVTB, during this year’s Gala Vallarta-Nayarit which took place recently.