Home › Events › London Is Calling Come From Away

London Is Calling Come From Away 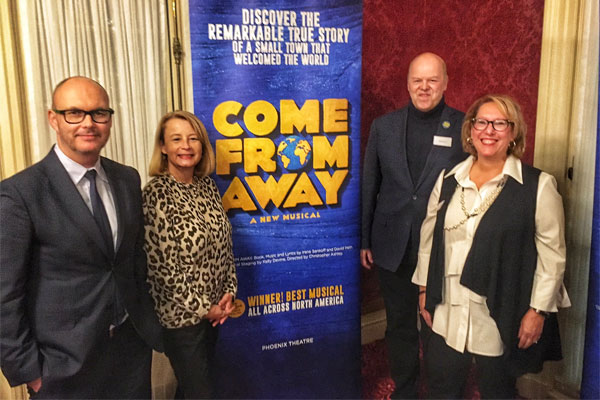 A wee bit of Canadiana is heading across the pond. Come From Away, the musical that tells the uplifting story of the 7,000 passengers from all over the world who were welcomed to the community in Gander, Newfoundland during the wake of 9/11, is hitting the stage in London, England as of Jan. 30.

In anticipation of its arrival, tour operators, airline representatives and members of the travel trade were treated to a special showing of the musical in Toronto last night (Oct. 18) featuring a post-show Q and A with the cast, courtesy of Made Tourism Marketing and VisitBritain.

“Gander was a population of about 9,000 so in essentially two hours the population of that city doubled. It’s about how all of these amazing people took care of all of these people who landed on their doorstep for five days,” Tony-award-winning Producer and founding partner of Junkyard Dog Productions Randy Adams told the group ahead of the production. “This story has permeated the world. This little show which Dave and Irene [David Hein and Irene Sankoff, the husband-and-wife writing team behind the musical] always say they thought it would be a great history lesson for high school students here in Canada has now become a worldwide phenomenon… It’s really a story about 9/12 because it’s about what happens after.”

In Toronto for a sales mission, four UK suppliers were also on hand for the evening: Shakespeare’s England, Experience Oxfordshire, Blenheim Palace and English Heritage.

“Tourism is a gigantic booster in the UK economy and what show do we want them to see next year?” he asks. “Come From Away!”