Home › Airlines › Look At The Alternatives

Look At The Alternatives

IATA Urges Canadian Government To Consider Other Options To Quarantine

IATA is urging the Canadian government to support the COVID-19 testing initiatives of Air Canada and WestJet as a means to safely reopen Canada to international and domestic travel without the need for blanket quarantine measures. The airline industry association points out that international traffic to Canada has plummeted since quarantine measures were introduced in March 2020.

Alexandre de Juniac, IATA’s director general and CEO, said: ‘‘There are alternatives to the quarantine measures currently in place that can both keep Canadians safe as well as revive the economy.” 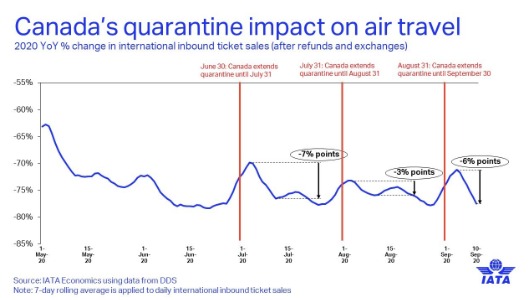 He continued: “The ICAO multi-layered approach (Take-off guidance) is one. The work that Air Canada and WestJet are doing on testing adds another dimension. It is critical that the Government of Canada acts on these before the economic and social damages become permanent and the public health consequences of mass unemployment become even more apparent.’’

As for the economic impact on Canada, consider the following:

For more go to www.iata.org .