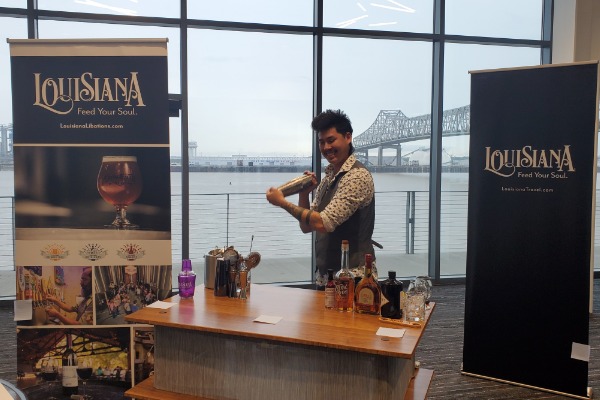 Joanne Scalamogna is happy to sing the praises of Purple Haze.

Scalamogna, who carries the flag for Louisiana’s tourist trade in this country, joined Louisiana Office of Tourism colleagues in hosting a virtual happy hour Thursday that showcased different Louisiana drinks and alcohols, with Scalamogna among other things expressing her appreciation for the state’s Purple Haze beer, the flavor of which is enhanced by berries and which has a moniker that recalls Jimi Hendrix’s classic song of the same name.

The event had Tin Le — a mixologist at New Orleans’ Pontchartrain Hotel — demonstrate the making of classic drinks that are native to his city, including the gin-based bee’s knees and the rye-based Sazerac, which Le said is seen as the first American cocktail and which has a New Orleans museum called Sazerac House dedicated to it.

Webinar participants were told that Louisiana’s’ Libations Trail showcases different distilleries, breweries and vineyards, with Scalamogna reporting that among state products is Bayou Rum, available in Ontario and perhaps elsewhere in this country.

Those wanting to nibble while they imbibe can opt for Voodoo chips.

These days of largely non-travel mean Canadians can’t at this time experience New Orleans drinks in the city in which they were created but Jennifer Berthelot of the Louisiana Office of Tourism — which uses the promotional slogan Feed Your Soul — told those taking part in the webinar that that will change and “we look forward to the day we can all be together again.”

“The gumbo is hot and the beer is cold,” he promised.