Louisiana Open for Business Despite Flooding 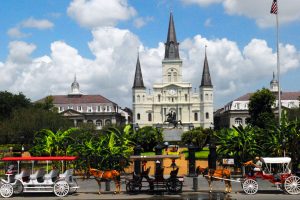 Tourism officials in Louisiana have issued a statement noting that the state remains open for business despite recent historic flooding.

The Louisiana Office of Tourism continues to monitor the effects of the recent floods on Louisiana’s tourism industry, a vital segment of the state’s economy and an US$11.5 billion industry.

“As the weather subsides in our capital and southwest regions, we are confident that business will return to usual. We also want to highlight that a majority of the state has not been impacted by this disaster,” said Lt. Governor Billy Nungesser. “We look forward to welcoming our international visitors to the state, and we encourage each of you to come experience all that we have to offer from the music, history, culture and the best food in world – there is always something to see and do here in Louisiana.”

The city of New Orleans, the Louisiana gulf coast and the central and northern regions of Louisiana as well as most of the geographic area of Louisiana were not affected by flood waters. Flood-affected areas fell within in the corridors of major rivers, tributaries and waterways in the regions around Baton Rouge and Lafayette southward. Major transportation arteries that were temporarily impacted by flooding have been reopened.

“The New Orleans CVB and the entire New Orleans hospitality industry is working tirelessly to assess the needs of those negatively impacted and support them through an aggressive materials drive and delivery program. We are committed to help those damaged areas rebuild, just as we received help to rebuild after Hurricane Katrina. The time has come once again to lean in to do whatever can be done to help those in need,” said Stephen Perry, president and CEO, New Orleans Convention and Visitors Bureau.