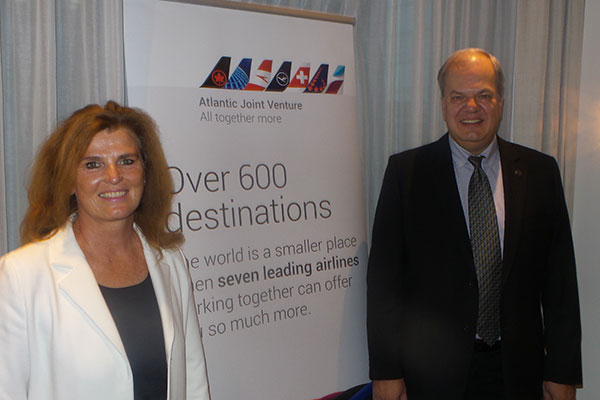 Plans call for Lufthansa to begin offering five weekly flights between this nation’s capital and the German city on May 16.

Next spring will also see Brussels Airlines – another Lufthansa Group member – move from offering a Brussels-Toronto route to Brussels-Montreal service. Air Canada – with which Birlenbach said Lufthansa Group has a “joint venture” – will then begin flying between Brussels and Ontario’s capital.

In all, the Lufthansa Group will have 76 weekly flights between Canada and Europe next summer.

“We are basically connecting the Canadian market with the world,” Birlenbach said.

The route developments come at a time when the Lufthansa Group – made up of seven airlines that collectively serve over 600 cities – is seeing growth, with Birlenbach reporting that it has 221 planes on order over the next six years. The current “huge fleet” has almost 800 planes, she added.

The Lufthansa Group is noting that the upcoming aircraft will be more fuel efficient and will reduce CO2 emissions.

Birlenbach said the Lufthansa Group has also decided to offer a “state-of-the-art” new business class arrangement with “multiple seating,” adding there are “different requirements for customers.” “Throne seats” that won’t have anyone to a passenger’s immediate left or right are part of that.

The different seating options will be available on B777s slated to replace Lufthansa Group 747s now used on Canadian routes.

Also decided upon is a new First Class that will be available on some flights in the group’s network, although Birlenbach said it won’t be offered in Canada because of limited demand.

New Economy seating will have a “bit more leg room,” she added.

Meanwhile, Hans DeHaan, the Lufthansa Group’s senior director for Canada, praised it for having a great relationship with travel agents.

Pictured are Birlenbach and DeHaan.