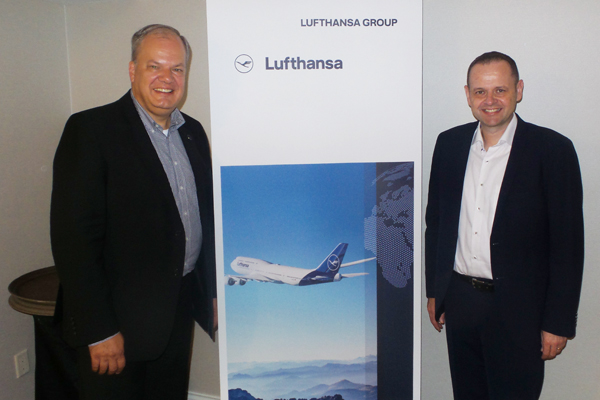 The Lufthansa Group is on the verge of adding hundreds of planes to its fleet, one of a number of moves it says helps place it at the forefront of aviation industry advances.

Hans DeHaan, the Lufthansa Group’s senior official in Canada, told a Thursday Toronto gathering that it now has 221 planes on order, 20 of them B787 Dreamliners.

DeHaan said Lufthansa is now the only Western Hemisphere airline to receive a five-star rating from authoritative airline-rating operation Skytrax. He also cited the airline’s decision to upgrade its entertainment system, an upgrade that enables people to watch a large number of choices that include older James Bond and older cowboy movies.

“It’s almost like you want your flight to be a little longer so you can get that third movie in,” he said.

The different carriers under the Lufthansa Group umbrella now link three cities – Montreal, Toronto and Vancouver – in this country with points in Europe. Sixty-two summertime frequencies a week carry people from this country to Frankfurt, Munich, Brussels, Vienna and Zurich.

The Lufthansa Group now has 20 sales staff in Canada, with DeHaan saying travel agents here are familiar with its carriers.

“We’re looking forward to continue the success story,” said Frank Naeve, the Lufthansa Group’s newly appointed vice-president of sales, The Americas, who added his employer has a “very strong presence” in this country.

DeHaan praised the Lufthansa Group’s decision to begin using A350s on Canadian routes, saying they are “unbelievable” when it comes to passenger comfort.

DeHaan also said the Lufthansa Group has a “good partnership” with Air Canada.

Having five hubs gives Lufthansa Group passengers the ability flexibility and the ability to “mix and match” their travel arrangements.

Meanwhile, DeHaan said that the individual Lufthansa Group airlines each have their own ambience, with, for instance, Austrian Airlines’ business class service offering 10 choices of coffee, a reflection of Vienna’s coffeehouse culture. Those travelling business class with Brussels Airlines can choose from eight Belgian beers.

Pictured are DeHaan (l) and Naeve.