On The Road And Casting A Spell In Brighton 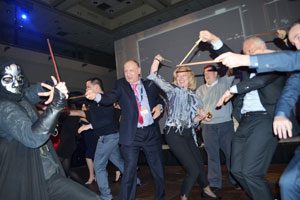 The magic of Harry Potter came to Brighton this week, as British tourism suppliers met with product buyers from around the world at the ExploreGB marketplace on England’s south coast, reports Press Today’s Ted Davis, who’s attending the show.

After a busy day of meetings, about 400 suppliers and 400 buyers converged on the Hilton Metropole on Brighton’s coastal waterfront for a gala dinner sponsored by Warner Bros. Studio Tour London – The Making of Harry Potter.

There, they were met with all manner of Potter magic manifestations, including a dinner room lit by candles to resemble the meeting hall at Hogwarts, and the presence of Potter cast character Warwick Davis as MC for the evening.

He kept guests entertained and helped lead them through lessons in basic magic, using wands that were supplied at each place setting.

Earlier in the day, delegates were all business, as they conducted about 40,000 scheduled brief meetings, jammed with as much info as possible within 12-minute slots at the nearby Brighton Centre.

They were there to continue generating the kind of commercial activity that has driven record tourist arrival and revenues for Great Britain.

A visitor count of 33.7 million, generating 22.2 billion pounds of tourism commerce in 2016, both set new benchmarks for the UK.

Those numbers are forecast to rise to 38.8 million and 23.9 billion pounds respectively in 2017.

Caption for Photo:
Delegates at the ExploreGB marketplace in Brighton do battle with “death eaters” during a Harry Potter-themed gala dinner event.