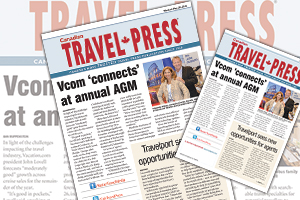 In this week’s digital edition of Canadian Travel Press, Ann Ruppenstein reports on Vacation.com’s 18th International Conference and Trade Show that was held in Hollywood, Florida last week, while Bob Mowat sits down with Travelport America’s group vice-president & managing director to talk about how both the GDS and agents are redefining their value in the marketplace.

Vacation.com – All About Challenge And Change

In light of the challenges impacting the travel industry, Vacation.com president John Lovell forecasts “moderately good” growth across cruise sales for the remainder of the year, reports CTP’s Ruppenstein.

More than 1,300 travel professionals were in attendance for the annual conference from May 22 to 26, including a significant Canadian contingent with 140 travel agents and suppliers and one of the keynote speakers, Bruce Poon Tip, founder of G Adventures.

Much like the theme of the conference, Connect More, the company is focused on enabling members to connect and engage with clients more efficiently, especially through the latest technology updates.

Since the launch of Agent Snapshot in June 2015, an online tool for members to create personalized bios with searchable travel specialties for potential travellers to access, the tool has led to the generation of over 35,000 consumer leads.

“One of the biggest challenges that today’s leisure distribution channel faces is connecting the online consumer with an offline expert, and I believe that Agent Snapshot is successfully proving it can bridge the gap,” he says. “This is your opportunity to really get in front of the consumer… it’s an opportunity to generate new business.”

For the full story on Vacation.com, just click here.

In a world that’s becoming increasingly complex for travel suppliers, Brett Kidd believes that a whole new range of opportunities has been opened up for third party intermediaries, reports Mowat.

Kidd, newly appointed as group vice-president & managing director, Travelport Americas, told Canadian Travel Press that: “I think that increased complexity in the market place makes the intermediaries – the indirect channel – that much more valuable and important.”

And as a result, Kidd said that Travelport has been working to provide agents – whether they’re online or offline – with the ability and tools to help them add new value to what they do for suppliers.

Today, he explained, suppliers – particularly airlines, but also others in the supply chain – want to portray their products in different ways and are looking for help in re-assembling those products and that “gives all of us an opportunity to provide new value for them” and by doing that, it “changes the conversation” between agents and suppliers.

In point of fact, Travelport has worked to change that conversation for quite a while now by positioning itself in the market as a travel commerce platform.

Kidd said that Travelport’s Travel Commerce Platform is a description that’s “meant to provide direction, not only for us internally, but it’s a signal to the rest of the market that we’re not thinking of ourselves just as a GDS anymore.”

While he’s quick to make it clear that Travelport still does all of the things – and more – that a GDS does, the change that’s been made is that Travelport is now “providing travel commerce solutions to all the stakeholders and customers that we currently serve.”

For obvious reasons, airlines have been a big part of the growth of that business for Travelport and it now has about 160 airlines in its rich content and branding program.

But Kidd had a lot more to say and for the full story, just click here.