Home › Canada › May Your Adventures Continue

May Your Adventures Continue 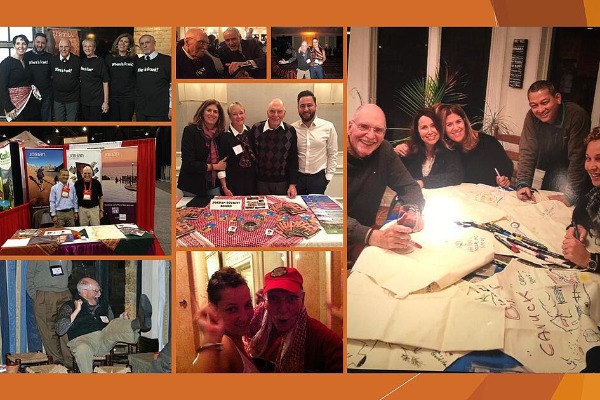 Let’s take a moment today and remember a remarkable man, Frank LaFleche, who passed away on March 11.

For over a decade, LaFleche has been an integral part of the Jordan Tourist Board in North America (JTBNA) – joining the JTBNA following a remarkable career with the Canadian Tourism Commission – in his memory, Malia Asfour and Frank’s JTBNA family have some thoughts they’d like to share.

So, read on and remember Frank …

“If you have worked in the travel industry in the past 10 years then you have definitely run into Frank & Marie LaFleche and you have most likely had a drink and a laugh with them. Frank thought he was retiring from the Canadian Tourism Commission (CTC) in January of 2005 and moving to Victoria with his wife Marie so that they could fish, make wine and help with Whale conservation on the Island. Little did they know that their retirement included running the Canadian office for the Jordan Tourism Board North America (JTBNA) while trying to find time to play on the Island.”

“It was a cold January morning in 2005 when Malia walked into Frank’s office to pull together a presentation for the Education Travel Conference (ETC). Frank was busy packing up his office and his last official work with CTC was to attend the upcoming ETC Conference. By the time Malia left his office, Frank had agreed to join the JTBNA Team and open up the Canadian market for Jordan.”

“When Frank agreed to work with us, we did not realize that the biggest bonus was that we not only got Frank but we also got Marie and Team JTBNA Canada was launched! They took the Canadian Market by storm, they helped lay the foundation and build the market for Jordan to become the 5th largest inbound market into the country. Frank was a legend, and for Jordan a true treasure. He opened up doors for JTBNA, brokered agreements and together with his longtime friend Bill Coleman started the Jordan Travel Mart similar to Rendezvous Canada that they had started together in the past.”

“If you were one of the lucky ones that had the privilege of traveling with Frank then you were in for an adventure. He had you running from one place to another, meeting new people, tasting new food and sampling some incredible drinks. “However, Frank had a way of going off the grid and one never really knew where Frank was and we ended up spending a lot of time looking for him, which became an inside joke with our team always having to ask “where is Frank?” Usually at the end of the day, we found him with an audience surrounding him at the bar telling stories, laughing and encouraging everyone he met that they must visit Jordan.”

“It is hard to lose a team member, a friend, a confidant, a mentor and an incredibly giving human. We mourn the loss of Frank and celebrate the laughter and joy he brought into our lives and all our friends in the travel industry.”

“As an honorary Jordanian and a true Canadian we will miss his laughter, sense of adventure and cocktail hour with this legend.”

“May your adventures continue our friend and how lucky is heaven to have you.”