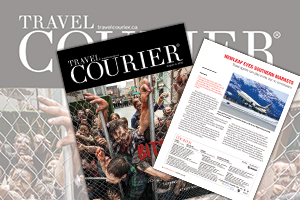 In this week’s digital edition of Travel Courier, Michael Baginski reports that Universal Studios Hollywood (USH) has a new face and it isn’t pretty.

Not supposed to be.

Los Angeles’ top tourist destination has continued its ambitious revitalization with the opening of “Don’t Open, Dead Inside,” a new permanent attraction based on the gruesome The Walking Dead TV show.

A real-life interpretation of what is believed to be the most watched show in cable television history, The Walking Dead attraction follows the arrival of the highly anticipated “The Wizarding World of Harry Potter” in April as the latest piece of the largest investment ever made by USH, which has seen over a billion dollars spent and 75% of the theme park completely re-imagined over the past five years (and counting).

“The dramatic changes that have taken place over the past five years have substantially altered the look, feel and experience of our park to redefine us as an entirely new destination,” says Larry Kurzweil, President of Universal Studios Hollywood.

In addition to Walking Dead and Wizarding World this year, the transformation of the 52-year-old attraction into a new theme park has included the addition of several next gen. rides and expansive lands – all designed to “immerse guests into the worlds of favourite movies and television shows.”