Home › Destinations › Mexican Delicacies You May Not Find On Every Menu

Mexican Delicacies You May Not Find On Every Menu 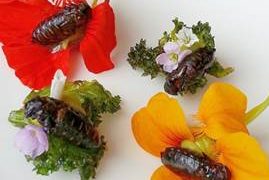 Mexico’s diverse gastronomic scene is often considered to be a popular driver for the country’s tourism.

Travellers from around the world come to try their unique dishes such as mole, authentic Mexican tacos and churros. What many may not realize is that Mexico has a wide range of delicacies every foodie should try. The following is a list of rare and fine Mexican dishes and the regions in which to find them:

While the thought of eating grasshoppers may make some feel queasy, they are considered to be a delicious treat by several Mexican natives. Oaxaca sells these little delicacies by the bag, allowing you to sprinkle them in your guacamole, crispy tostadas or eat them straight out of the bag.

Commonly known in English as “corn smut,” Huitlacoche is essentially a grey fungus that grows on corn. This tempting dish can be found in the region of Xochimilco, served in quesadillas and some soups. Huitlacoche has a unique, sweet fermented flavour that will leave you wanting more.

Hidalgo offers one of the most unique dishes of all, escamoles – also known as insect caviar. Ant larvae is harvested from the maguey plant and sold at an impressive price point. While its texture is similar to cottage cheese, it has a nutty taste similar to pine nuts.

To learn more about these Mexican delicacies and the destinations they hail from, visit http://www.visitmexico.com.