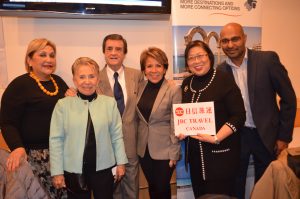 The Richmond-based tour operator hosted a dinner during which the reps from Mexico met JBC industry partners.

During presentations guests learned, for instance, that 1.74 million Canadians visited Mexico in 2016 and that Mexico stands eighth in the world in terms of arrivals based on those 2016 numbers. They also learned that Acapulco’s city infrastructure is in the midst of major changes, including the launch of the Acabus mass transit system, the construction of the Acapulco Macro Tunnel and the opening of a new Acapulco airport next year. There are about 20,000 hotel rooms in 275 hotels in Acapulco.

Guests also learned that Aeromexico is now operating flights to Mexico City from Toronto, Montreal, Vancouver and, most recently, Calgary, where services started last June. Two flights per day depart Vancouver, using a B737-800 aircraft. It has 160 seats, including 16 business class. The seat pitch for economy class seats is a generous 34 inches, said Neil Prasad, market manager of Aeromexico in Vancouver.