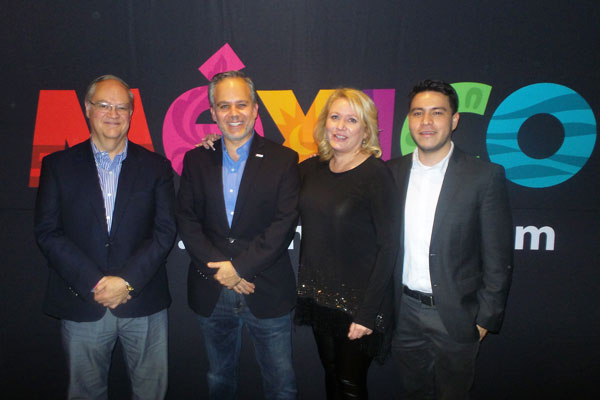 The director of the Mexico Tourism Board’s Toronto office used a Thursday night Toronto party to thank some of those who have helped his homeland’s tourism trade.

Cesar Mendoza told the gathering of tour operator and airline representatives and others that he’s appreciative of the support Mexican tourism has received from them. Mexico is hugely popular with Canadians and others and has been steadily been working its way up the list of the world’s 10 most-visited countries.

But Mendoza noted last night’s party comes at a time when “rumours” are circulating about the fate of Mexico Tourism Board offices in Canada and elsewhere, with officials in Mexico’s newly elected government having said they want to close all tourism board offices outside Mexico as a way of saving money.

“I want to tell you that whatever happens we’ll let you know,” Mendoza said.

Pictured are Gonz Moreno of Moreno Travel; Mendoza; Michele Martinson of Aeromexico and Horacio Aguilar of the tourism board.