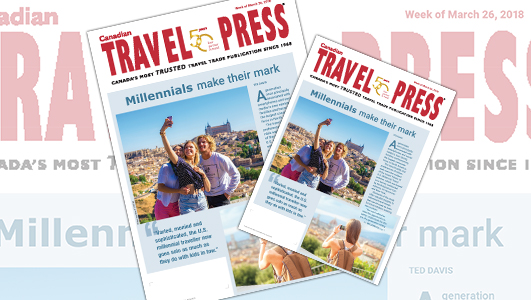 A generation once principally associated with smartphones and social media is now raising families and becoming the largest consumer force in North America, writes western editor, Ted Davis in this week’s issue of Canadian Travel Press.

The travel habits and preferences of millennials were the subject of the recent Future of U.S. Millennial Travel webinar, which was based on a survey conducted by the Resonance Consultancy of Vancouver and New York.

Elements of the study offer valuable insights to millennial travel trends that can be used as tools for travel retailers seeking new markets.

“You can’t afford to miss the opportunity to better understand the drivers of a generation sitting on $200 billion in spending power,” says Resonance president Chris Fair.

Millennials are by definition those aged between 20 and 36. There are 75 to 80 million millennials in the U.S. now, surpassing the number of boomers in 2016 and becoming the largest demographic in the country. They are also the fastest growing segment of travellers, says Resonance – hence the relevance of the study. “They are a driving force in travel now,” said Fair.

Some 1,400 of them completed questionnaires for the purpose of compiling the stats.

With the results, Resonance established some general characteristics of the group which may be useful to travel planners and sellers. For instance, they speculate that the online world, which often guides millennial choices, has had paradoxical impacts on their travel habits.