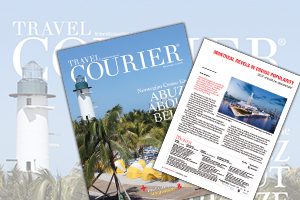 The decision to retain the tented facility was taken in light of the fact that the city has become such a popular cruise destination that there will be periods when the new facility will be unable to meet demand, according to Sylvie Vachon, president and CEO of the Montreal Port Authority.

Vachon was speaking at a Montreal Cruise Committee lunch aboard the Regent Seven Seas Mariner during its final visit of the season.

She reported that 17 ships carrying a total of 86,000 passengers and crew made 55 calls this year and revealed that lines have already scheduled 50 international and 16 domestic calls for the coming year.
“2017 should be nothing short of spectacular,” said Vachon, who added, “The work being done on the new maritime terminal is going according to schedule and we will be ready to open its doors on May 6, just in time to welcome the first ship of the season.”

And she stated, “In addition, to meet the increased number of cruise ships coming to Montreal in the coming years, we have decided to permanently add piers 34 and 35 to our reception infrastructure.”

Tourisme Montreal chief Yves Lalumiere noted, “Montrealers can be proud of catering to this high-end customer base. The 2017 season looks promising, with a 25% increase in traffic being projected, which would bring the total number of cruise passengers to a record 100,000.”