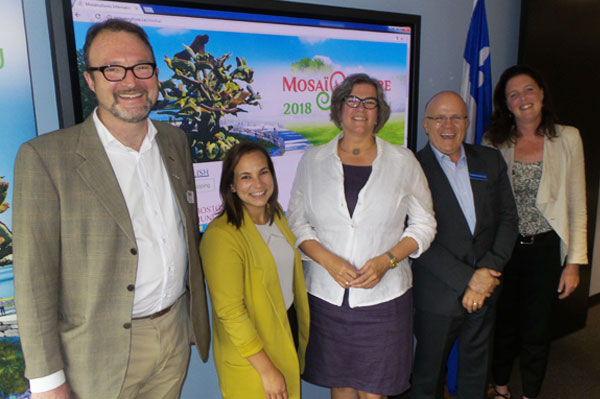 The tourism trade in the Quebec city of Gatineau is banking on some flower power this year. MosaiCulture 2018 Gatineau features “majestic floral masterpieces,” with impressive works having metal frames that are then coated with plants. More than 5.5 million plants are found in attraction, which continues to Oct. 15.

Among the works is the Tree of Birds, which weighs some 100 tonnes, reaches around 60 feet in height and features recreations of 56 bird species that are threatened with extinction, a fitting reminder for a an attraction that this year is reminding visitors of the fragility of this planet. MosaiCulture last year paid tribute to Canada during the 150th anniversary of Confederation celebrations and was expected to attract 500,000 visitors but instead drew 1.3 million.

Meanwhile, Jantine Van Kregten of Ottawa Tourism – which promotes a city that borders Gatineau, separated only by the Ottawa River –noted this spring saw the opening of the Ottawa Art Gallery, which among things showcases Group of Seven artworks and indeed has a cafe named after Group of Seven member A.Y. Jackson.

Other additions to the city’s tourism infrastructure include a just-opened Le Germain hotel. Van Kregten also touted a thriving craft beer scene in Ottawa and the surrounding area, with 38 craft breweries found within an hour’s drive of the city.

Van Kregten also used the gathering to praise outdoor activities such as canoeing, cycling and hiking in the Ottawa area. Near Ottawa is Chelsea, Que.’s Nordik Spa Nature, which she labelled the “largest spa in North America.”

A stay at the spa can be “very blissful,” she added.

John Swettenham, chief marketing officer for the Canadian Museum of Nature, noted there are seven national museums in the Ottawa area, with his own having a “great big sculpture of ice … If you touch the ice, it will melt in your hands,” he said of an exhibit that provides insights into the Arctic. The Canadian Museum of Nature showcases “Canada’s Nature under one roof,” he continued.

Swettenham also praised the National Gallery of Canada for having the largest collection of Canadian Indigenous art anywhere and also reported it has numerous Group of Seven paintings.

For more, go to http://www.mosaiculture.ca .