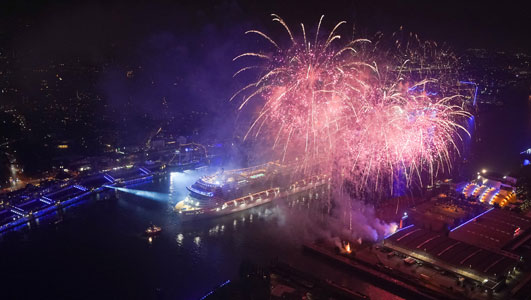 MSC Cruises christened MSC Grandiosa, its newest, most environmentally-advanced flagship, in Hamburg, Germany, over the weekend.

The cruise line’s largest and longest christening event ever, this was part of MSC Grandiosa’s series of celebrations over 27 days in eight countries and 11 ports.

Designed to ensure even cleaner air emissions and improved overall environmental performance both at sea and ashore, MSC Grandiosa is equipped with advanced cutting-edge technologies and, according to officials, sets a new standard for sustainability at sea.

A purpose-built “MSC Village” on the banks of the River Elbe brought the festivities to shore, welcoming more than 5,000 locals to experience the christening from land with live music and food trucks.