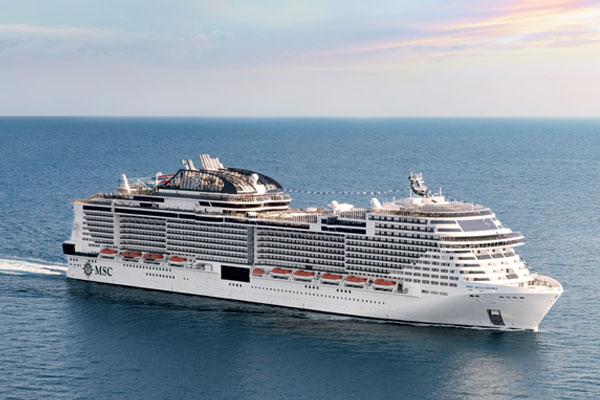 With three Meraviglia generation ships under simultaneous construction at the shipyard in Saint-Nazaire, France, the two parties marked a double celebration, with the delivery and MSC Virtuosa’s “Coin Ceremony.”

Pierfrancesco Vago, MSC Cruises’ executive chairman, said, “Today’s delivery marks another chapter in the story of our partnership with Chantiers de l’Atlantique. Together, we have already brought to life 14 highly-innovative cruise ships, paving the way for our company’s initial growth. Many more will be built together over the coming years to further deepen the reach of our fleet. Furthermore, MSC Bellissima’s elegance and beauty, as well as focus on the best and latest maritime and environmental technology at sea, bear testament to our restless pursuit for innovation.”

MSC’s commitment to protect the environment can be seen in Bellissima, which is equipped with some of the latest environmental technologies available. These include, among others, a cutting-edge exhaust gas cleaning system, an advanced wastewater treatment plant, systems for the prevention of oil discharge from machinery spaces, a ballast water treatment system, and various energy-saving improvements – from heat recovery systems to LED lighting.

Bellissima is also equipped with cutting-edge guest technology. It is the first MSC ship to feature ZOE, the world’s first virtual personal cruise assistant, which has been added to MSC for Me. The voice-enabled virtual personal assistant will be found in every cabin and can answer hundreds of questions about the cruise.

Bellissima is the second Meraviglia Class ship to join MSC Cruises’ fleet. On March 4, it will depart on its maiden voyage, which will take the ship to Genoa, Italy, where it will spend its inaugural season, offering Western Mediterranean cruises. In November 2019, Bellissima will reposition to the Gulf, providing weekly sailings out of Dubai. In April 2020, it move to the East China Sea.