Home › Events › My Date With A Prince

My Date With A Prince 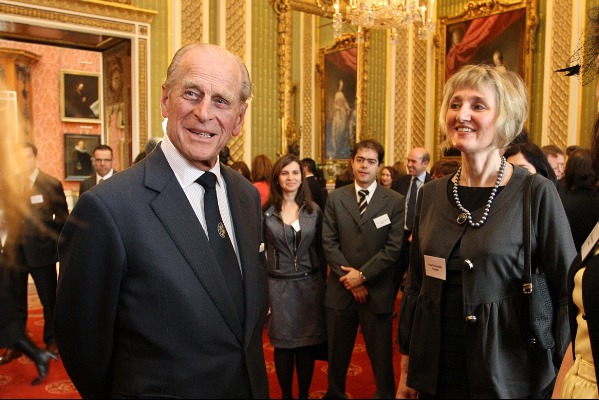 Over the past week, people around the world have shared their memories of HRH, Prince Philip, Duke of Edinburgh. Today, Ilona Kauremszky shares a story from June 2009 and her experience of having High Tea with the Prince.

Read on and find out how Ilona’s date went …

Buckingham Palace, LONDON – Okay some of us go through life kissing plenty of frogs with none ever turning into a prince.

But what about meeting one? I decided to go for the real deal.

Buckingham Palace is normally off-limits but not this time.

Only recently, since 1993 which followed the terrible fire at Windsor Castle, has Her Royal Highness, Queen Elizabeth II, opened the door of her private residence, offering public tours for eight short weeks during the months of August and September. While the public has access to tour some of the State Rooms, HRH and the rest of the Royals head up to Scotland for their annual countryside retreat.

Except on this occasion things were different.

My notice was done in classic 21st century style via an electronic invitation and the month was June.

“I’ve got a date with Prince Philip. The Duke of Edinburgh is having a private reception in the Green Drawing Room and I’ve got to find something to wear,” I said jumping up and down in total disbelief.

With no time to spare, or so it seemed, I went into high search mode. Closet door opens, hangers upon hangers flying through the air, wrestling with the last dress tucked in the deepest orifice of my closet, I stared blankly at my finds and whimpered.

“I don’t know what to wear.” I drew a blank, got on the phone and asked friends and family for some advice. Sounding like a high school kid unsure of what to wear to the big prom, I tried to turn back the hands of time and went on one of those mother-daughter shopping expeditions many of you gal readers will all recall and surely appreciate.

Mom and I had a plan. Like a scene from Bridget Jones Diary, I imagined myself as Renée Zellweger, waiting for that opportune moment one early morning at the local mall. Mom and I sat in the car and waited in the parking lot, strategically eyeing the doors. “Someone just opened them,” I said with strong conviction. Without a flinch, the battle hatch opened and inside we ran (okay I ran). After a series of trying-on sessions, we left with my new finds, a dress for rain and a dress for sun.

The day finally arrives. Overcast sky, humidity in the air, how would things turn out? Trying to avoid the spitting showers from my hotel I ran to the parked double-decker (it’s got to be a double-decker because nothing else will do in this Bridget Jones moment) and headed for the upper deck.

London streets before me in the thick of a Tube strike (no kidding, the Tube had a two-day strike in June), the double-decker enters the now-opened gates to Buckingham Palace. A small crowd gathers by the fence, watching our descent as we amble to the back quarters, red carpeted stairs and all.

“We are very lucky to be here and thrilled to have you here to show you Britain,” and so began Mr. Christopher Rodrigues, chairman of VisitBritain. “The last time we had a really big group of journalists visit was for Foot and Mouth. To highlight the fact that it is a particularly unique time for Britain, the airlines are offering extraordinary values, the hoteliers and restaurateurs are doing the same. The value is there. The variety is there.”

As the speeches continued, I surveyed the Grand Staircase, looked at the floral displays, inspected the red carpet and was amazed at the sheer beauty and scale of this magnificent palace. The opulent walls adorned in the finest hand-painted silk wall coverings highlighted the rarest of oil paintings from the Great Masters which are now forever captured to my memory.

A mini-version of United Nations, my group of jet setting colleagues from far flung places like Singapore, Hong Kong, Brazil, South Africa, and Australia all gingerly plied the corridors, ascending stairs that resembled a movie set, and proceeded to glimpse into the world of HRH with all its pageantry.

Once the walkabout ended, I entered the Green Drawing Room for Earl Grey tea and Duchy originals, care of the Prince of Wales Charities Foundation. Time was ticking and soon HRH would grace us with his presence.

I admit I’ve always been a Royal Watcher and have a deep affection for Her Royal Highness. She projects that feminine strength and has an aura, a je ne sais quoi about her that seems to leave crowds smiling whenever she enters a room. 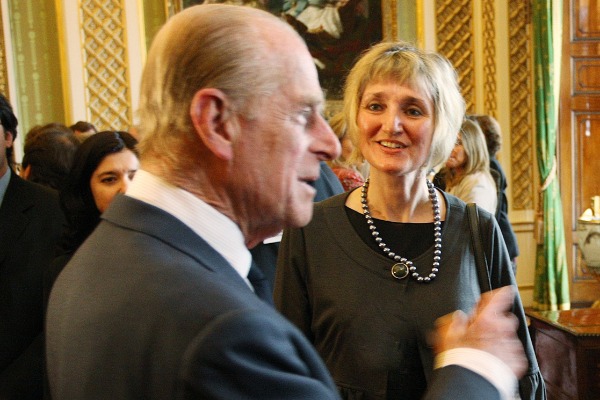 The Duke of Edinburgh whose charm and wit is world renowned made me wonder what I would expect upon meeting him. Would I say the right thing? Would he say something to me? What do you do? Turns out this working Royal had five receptions on this day and to boot, Prince Philip was celebrating his 88th birthday.

My questions were soon answered. In mini-UN fashion, the country delegations were presented. “It’ll be quite informal,” was the tip of the day so curtsying and bows were optional.

In a New-York minute, the amiable Prince arrives, shaking his hand on occasion and down the assembly line he went. It was Canada’s turn to shine.

Here we stood in line like a chorus line. Somehow I am at the end. There was an embarrassing snicker from one Canadian writer who flung out her wrist bearing a secret service style envelope she had prepared to give him. “What is this?” He shuddered unearthly staring at the white envelope like it was from Mars.

“Why it’s your birthday card,” she declared. He ignored the birthday greeting card, hands clutched behind his back in his signature stance and proceeded to the next, and the next until finally my neighbour was next.

She tells His Royal Highness about her curtsey-practices and asks him whether she can curtsey. “I’d rather you not,” he dryly quips and quickly moves towards me. What will he say to me?

Thankfully, I was once Miss Hungary representing the Hungarian-Canadians living in the Niagara Region, and my experience as a Miss Niagara Falls contestant during my teen years, allowed me wonderful opportunities to mix and mingle with government officials so I was set. I had this. I was ready.

“And you my dear, are you enjoying the sights of London?” he casually inquires as I recall how blue his royal blue eyes were.

I curtsied. He shook my hand. We chatted some more. He made me laugh. His ease as he approached life’s unpredictable unscripted moments was heartfelt.

I still cannot get over how the Queen’s Royal Consort even on his birthday – his 88th birthday – was compelled to perform his royal duties. On that humid late spring afternoon, Prince Philip toured five events but this one at Buckingham Palace was the one he hosted for an entire delegation of international journalists.

There were other private exchanges that occurred between the Prince and I in the Green Drawing Room but those memories I have tucked away and hold them dearly.

He will be missed.