NCL Gets ‘Kinky’ At Sea 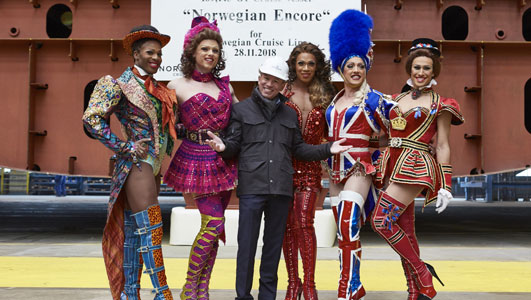 Following the major construction milestone and maritime tradition of embedding a “commemorative coin” within the keel blocks of the ship, attendees were treated to an unexpected presentation. Four performers appeared in extravagant costume provided a surprise performance from “Kinky Boots,” confirming the Tony Award-winning musical as the headlining act on Norwegian Encore.

“Norwegian Encore’s keel laying ceremony was not only special because we crossed a key construction milestone, but because we celebrated the incredible partnership we have had with the Meyer Werft team – a team of talented individuals who have built some of our most innovative ships,” said NCL president Andy Stuart (pictured above with Kinky Boots cast members). “Today’s surprise ‘Kinky Boots’ performance showcases the evolution of the meaningful and unforgettable experiences we are dedicated to providing our guests. We are very excited to be the first to feature this award-winning musical at sea.” 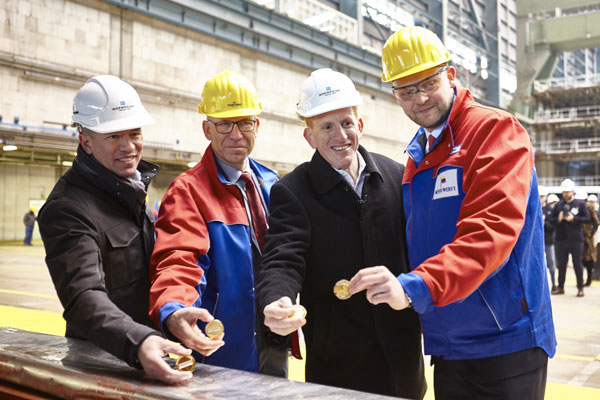 Additional entertainment that made a debut on Norwegian Bliss and will be available on Norwegian Encore include “Happy Hour Prohibition: The Musical,” the interactive cocktails and theatre show, and guest favourite – The Cavern Club, which transports audiences back to the legendary Liverpool club with live musical performances from a Beatles cover band.

As the only company to offer go-karts at sea, Norwegian is expanding its portfolio with a “bigger and better” two-level race track on Norwegian Encore. At nearly 1,150 feet, 10 turns and four points that extend up to 13 feet over the side of the ship, guests will enjoy the largest race track at sea. Additional upgrades include a covered viewing area in the centre of the track where guests can provide passing go-karts with an additional turbo boost by tagging them with a laser beam.

Norwegian Encore will also feature the Galaxy Pavilion, a more than 10,000-sq.-ft. indoor virtual reality complex, showcasing cutting-edge technology and interactive gaming. From multi-sensory virtual experiences, simulators to an escape room taking guests on a labyrinth of adventures, guests of all ages will be able to find something to enjoy.

The industry’s only open-air laser tag arena made popular on Norwegian Bliss will reappear on Norwegian Encore, but this time as the resurrected lost city of Atlantis. The ship will also feature the Aqua Park, which guests have come to expect of the Breakaway and Breakaway-Plus class, including two multi-storey waterslides.

At approximately 169,000 gross tons and accommodating up to 4,000 guests, Norwegian Encore will cruise out of Miami every Sunday and sail seven-day voyages to the Eastern Caribbean, beginning with its first journey on Nov. 17, 2019 through April 12, 2020.