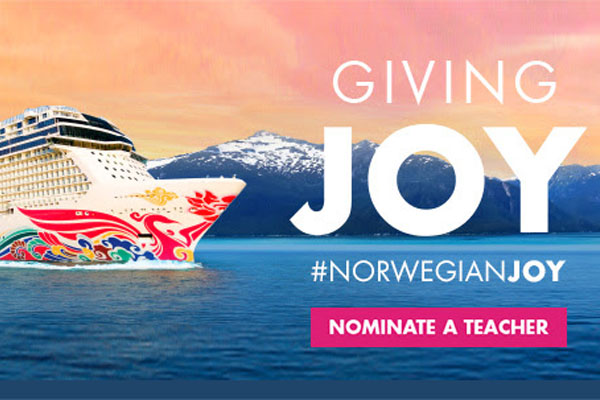 Not even two weeks in and Norwegian Cruise Line’s (NCL_ “Giving Joy” campaign, an effort developed to recognize and reward deserving teachers, has garnered more than 40,000 nominations and over one million votes.

NCL launched the campaign on March 12 to celebrate the North American debut of its 15th ship, Norwegian Joy. The ship’s inaugural cruise coincides with Teacher Appreciation Week (May 6-10).

“We knew this campaign would strike a chord, but we have been blown away by the response,” said NCL president Andy Stuart. “Recognizing and rewarding teachers, who often are unsung heroes in our society, is resonating with our guests and we couldn’t be happier. As I’ve said, through this effort, we are able to celebrate the power of education and travel, and reward those who have taken responsibility for our future, our children.”

Norwegian’s Giving Joy campaign, which celebrates the intersection of travel and education, runs through April 12. The company is asking for nominations of certified or accredited teachers in Canada and the US who are inspiring joy in the classroom. The 15 teachers with the most votes will win a seven-day cruise for two. They will also be provided airfare and accommodations for an award ceremony taking place in Seattle on May 3 where they will have the chance to win $15,000 for their school.

“I encourage everyone to nominate the teachers in their life,” said Stuart. “This is an opportunity to publicly say ‘thank you’ and recognize the outstanding efforts they make every day.”

To nominate a favourite teacher, to vote and for terms and conditions, visit https://www.nclgivingjoy.com.