A New Look For Outer Shores 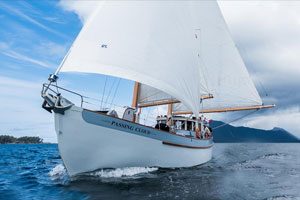 Outer Shores Expeditions marked its fifth anniversary in 2017 with the unveiling of a new logo and website celebrating the shared beauty and spirit of British Columbia’s wild Pacific Coast and the company’s classic wooden schooner Passing Cloud.

The newly unveiled logo and website were conceptualized and designed by Owen Perry, a British Columbia-based interactive designer. Much the same way the 70-foot wooden schooner Passing Cloud is at the core of every Outer Shores Expeditions sailing, the new logo design focused on the iconic ship.

“It was important to me that the new logo was distinctly recognizable as Passing Cloud and embodied her unique balance of strength, grace, and authenticity.”

“Owen Perry did a fabulous job as we worked through close to 100 versions of the logo until we got it perfect. We couldn’t be happier with the result and we now have a compelling and distinguished emblem to lead our overall brand for years to come.”

As for the new website, Outer Shores and Owen Perry drew inspiration from the visually arresting beauty of coastal British Columbia.

Prominently featuring photographs courtesy of Outer Shores Expeditions’ coastal photography specialist James Thompson, the new look site is now rich in video and imagery reflective of the spectacular scenery and wildlife guests encounter throughout their expeditions, giving visitors to outershores.ca insight into the onboard experience like never before.

The brand’s new http://www.outershores.ca is rich in video and imagery reflective of the spectacular scenery and wildlife guests encounter during expedition sailings

Sail on over to http://www.outershores.ca to check out both the new look and the 2017 program.