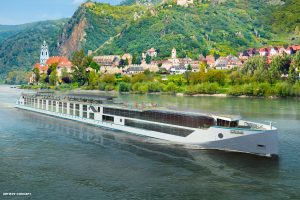 In April and May next year, the new river ship will sail three seven-day “Danube Serenade” routes between Budapest and Vienna, and one 11-day “Reflections on the Danube” sailing. The new voyages are a shorter complement to Mahler’s 16-day “Grand Europe” itineraries, which sail between Amsterdam and Budapest for most of the year, cruising the Rhine and Main Rivers.

The newly added itineraries depart April 10, 17, 24 and May 1 and visit European hamlets including Krems, Spitz, Linz and Melk, Austria and Bratislava, Slovakia. Three of the voyages feature dedicated theme programming, including special guest Nancy Brinker – former U.S. Ambassador to Hungary and founder of the Susan G. Komen Foundation – aboard the April 10 sailing discussing Art & Diplomacy, the annual “President’s Cruise” with Edie Rodriguez on the April 24 sailing, and an in-depth focus on Jewish Heritage excursions aboard the May 1 sailing.

Crystal Mahler will embark on its maiden voyage in September from Amsterdam, joining Crystal Bach on European waterways. Crystal Debussy and Crystal Ravel will join the fleet in 2018.

In each destination aboard every Crystal River Cruises itinerary, travellers can choose from a selection of complimentary Crystal Adventures ashore, or opt for further exploration with additional curated excursions.