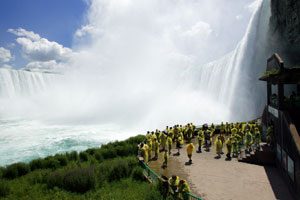 Niagara Falls is arguing that it deserves the official title of Eighth Wonder of the World.

The unofficial title is often given to sites, buildings, projects and designs that are deemed comparable to the original Seven World Wonders.

Niagara Falls is often listed as a top natural wonder or landmark, but the Falls are only one characteristic that make Canada’s Niagara region “a top contender for the title.”

“When people think of Niagara, the first thing that comes to mind—and for good reason—is likely the Falls,” says Anthony Annunziata, VP of marketing at Marriott Hotels in Niagara Falls. “It’s a major part of what makes Niagara great, but the region has a lot more to offer that truly ties it all together and makes it one of the most beautiful, enjoyable places in the world.”

Visit Niagara has launched a campaign called #claimthe8th in an effort to have Niagara Canada recognized as the official Eighth Wonder of the World.

The campaign highlights a number of features that support the cause, including the fact that:

Niagara is full of quality hotels, such as the Marriott on the Falls & Marriott Fallsview Hotel & Spa, offering some of the “most awe-inspiring views in the world.”

Go to http://www.niagarafallsmarriott.com for more.