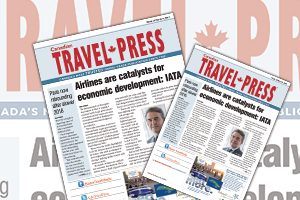 Welcome to the future!

While there’s no sign with that message actually hanging outside Merit Travel’s offices these days, there probably should be as the mood emanating from the company’s Toronto headquarters – following its blockbuster deal with Japan’s H.I.S. Co. Ltd. – is on the turbo-charged side of upbeat, reports executive editor, Bob Mowat in this week’s digital edition of Canadian Travel Press.

During a recent interview, it was abundantly clear that both Merit Travel Group’s founder, Michael Merrithew and the president of Merit Travel’s leisure brands, Jason Merrithew have been fully energized by the company’s bright prospects for the future.

“We’ve formed a NewCo Investment Company with H.I.S. Co. in Japan and we hold a 10.1% equity stake – and that’s indefinitely – [H.I.S.] owns 89.9% and Merit Travel is part of that NewCo,” Michael Merrithew stated when asked to offer additional details on the deal.

“The reason that we structured it the way that we did was to lock in the enterprise value of Merit Travel, but the objective of the NewCo was to significantly invest in growth – through acquisitions in particular – [which would be] funded by H.I.S., not funded by Merit,” he said.

Clearly for Merit Travel, it was a deal that was all about the future, with Merrithew telling CTP: “While we’ve had pretty good growth – some would say outstanding growth, others would say not as good as we could have – we’ve achieved, I believe, pretty good growth results over the last 25 years. We’ve come from a business with about $1 million in annual sales to a business with well in excess of $300 million in [annual] sales over that 25 year period.”

That said, he pointed out: “The internal debate among the shareholders – the stakeholders, I will say, not just the owners of the business, but the stakeholders of the business which includes some of our key managers – was, ‘Okay, now what? Can you just carry on the way you’ve been going or do you really need to look at alternative strategies.’ And we as family, of course, want to look at where do we want to be, going forward.”

As Merrithew sees it: “We’ve invested a lot in this business and this industry over the last 25 years and I’ve always believed, and continue to believe, that growth – and in particular, profitable growth – is a big part of what this industry demands.”